Home / ISAevents / Pedro X. Molina on the Art of Resistance

Pedro X. Molina on the Art of Resistance

In 2017 Pedro X. Molina was a prolific participant in the #FreeNseRamon campaign demanding freedom for fellow illustrator and political cartoonist, Ramón Nsé Esono Ebale, who was imprisoned for his work criticizing the government of his own country, Equatorial Guinea. Esono Ebalé’s work and Molina’s contributions to the #FreeNseRamon campaign are both featured in The Art of Resistance exhibition on display throughout the FedEx Global Education Center until December 13, 2019. Come hear/see Molina share his work in Nicaragua and his efforts to support freedom of expression everywhere.
Pedro X. Molina, also known as “PxMolinA,” is an internationally acclaimed political cartoonist, illustrator and journalist from Nicaragua. In December 2018, when the offices of news media outlet Confidencial were taken over by government forces, Molina fled his country during a national crackdown on journalists and government critics. He and his colleagues continue to publish daily in Confidencial.com.ni, either from exile or from other locations in Nicaragua. In summer 2019, Molina won the prestigious Maria Moors Cabot Award in international journalism from Columbia Journalism School. In 2018, Molina won the Courage in Editorial Cartooning Award from Cartoonists Rights Network International, as well as the Excellence in Journalism award from the Inter American Press Association.
Sponsors
This event is sponsored by the Humanities for the Public Good Initiative, Institute for the Arts and Humanities, Global Relations, Center for Media Law and Policy, Institute for the Study of the Americas, Department of Romance Studies and UNC Global.

Event Contact
Angela Stuesse, associate professor of anthropology and global studies at the UNC-Chapel Hill, astuesse@unc.edu
About the Exhibition
The Art of Resistance showcases artwork Ramón Esono Ebalé created prior to and during his imprisonment and original artwork created for the exhibition, as well as the art by those who advocated for him during his imprisonment. The exhibition touches on themes of human rights and freedom of speech, as Esono Ebalé’s story and art implore audiences to see the right of expression as an essential human right. His work illustrates the dangers often faced by those who speak out against injustices. 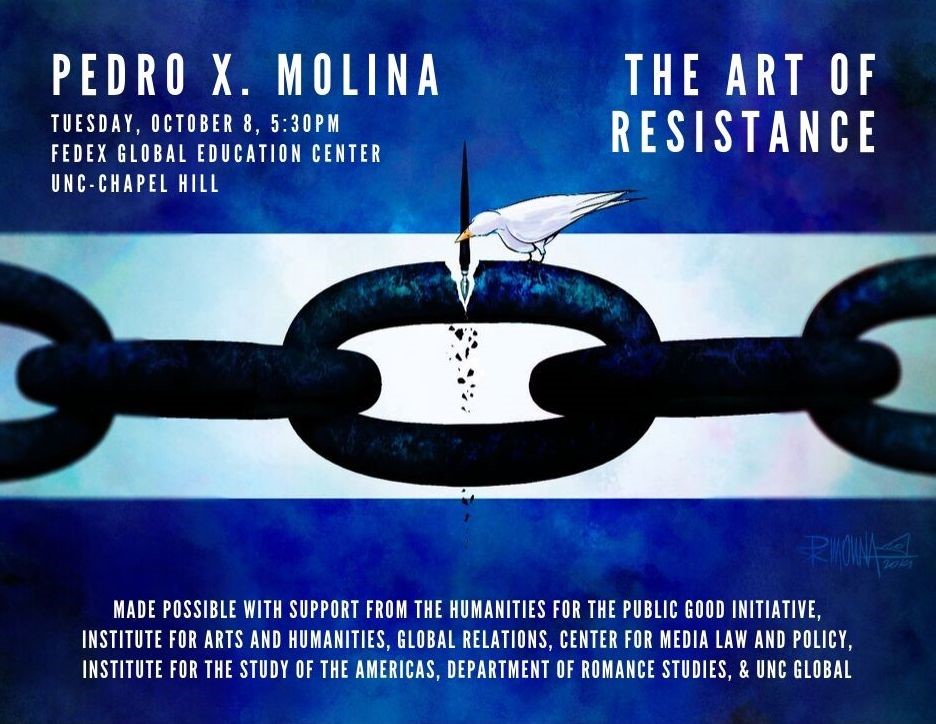