In the English-speaking world, Latin Americans are more often written about than read. As a result, the educated public in the United States continues to learn most of what it does know about the region from Latin Americanists who are themselves foreigners to the national realities they study. Since October 1990, the UNC and Duke Consortium in Latin American and Caribbean Studies has undertaken an effort to address this imbalance by establishing an ongoing editorial series, “Latin America in Translation/En Traducción/Em Tradução.”

The Latin America in Translation Series is a joint initiative of the UNC and Duke Consortium, Duke University Press (DUP), and the University of North Carolina Press (UNCP) and is directed by an editorial committee of faculty members and editors from the three sponsoring institutions. Since 1993, more than 60 books have been published in the series with more forthcoming regularly.

The Series translates and publishes in English outstanding books in a wide range of fields by important Latin American writers and scholars. It helps to further dialogue across academic communities in Latin America and the English-speaking world. And it brings Latin American content to students and scholars in other fields of study.

Nomination Procedures:
Interested scholars are encouraged to nominate a title for consideration in the series; self-submissions are not invited. Only complete submissions will be accepted. Note that due to the pandemic, all materials should be submitted electronically, as e-mail attachments, to jprather@duke.edu. We are working remotely. Our building is closed and we are unable to receive packages for the time being.

Please include the following:
- A nomination letter from one or more people, other than the author, that addresses the book’s importance within Latin America and for an English-language audience, as well as its need for translation.
(Recommended) One or two particularly significant published reviews of the book with complete references for the sources.
- A copy of the book (a PDF version is fine). 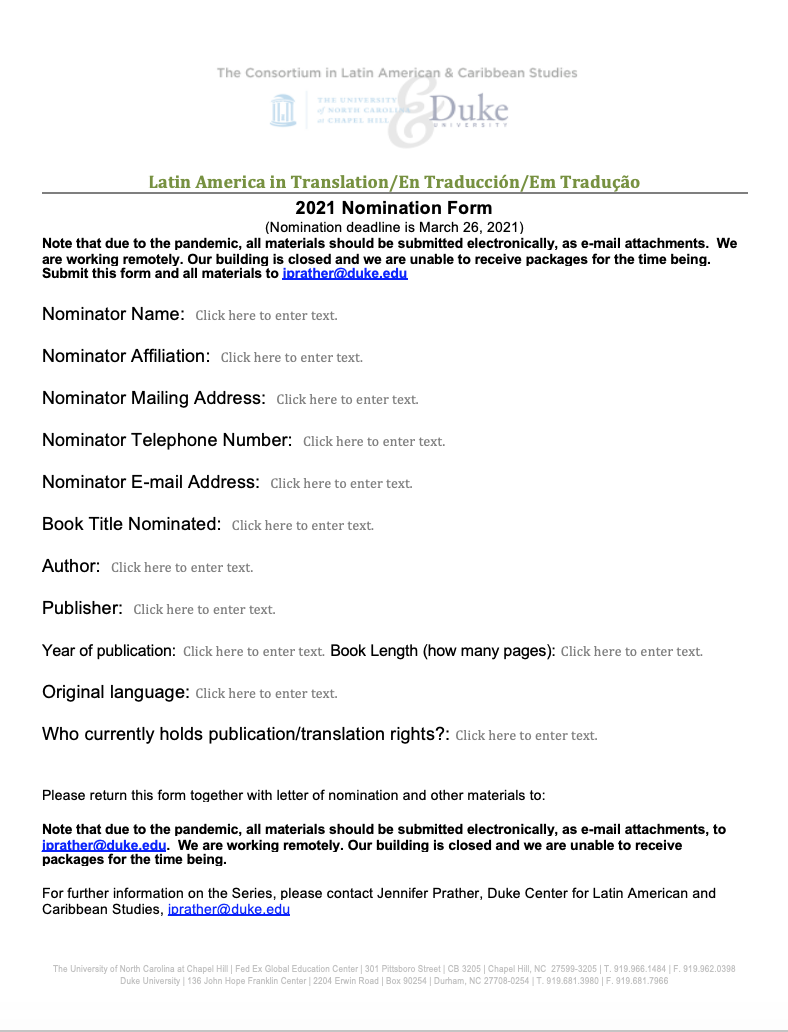