Colombia: Protests, Post-Conflict, and a Pandemic

By Luis Daniel González
Luis Daniel González studied Latin American Studies, Political Science, and a minor in History at UNC Chapel Hill. In addition to his research on Colombian history, he teaches history at an all-girls academy in Los Angeles, California. 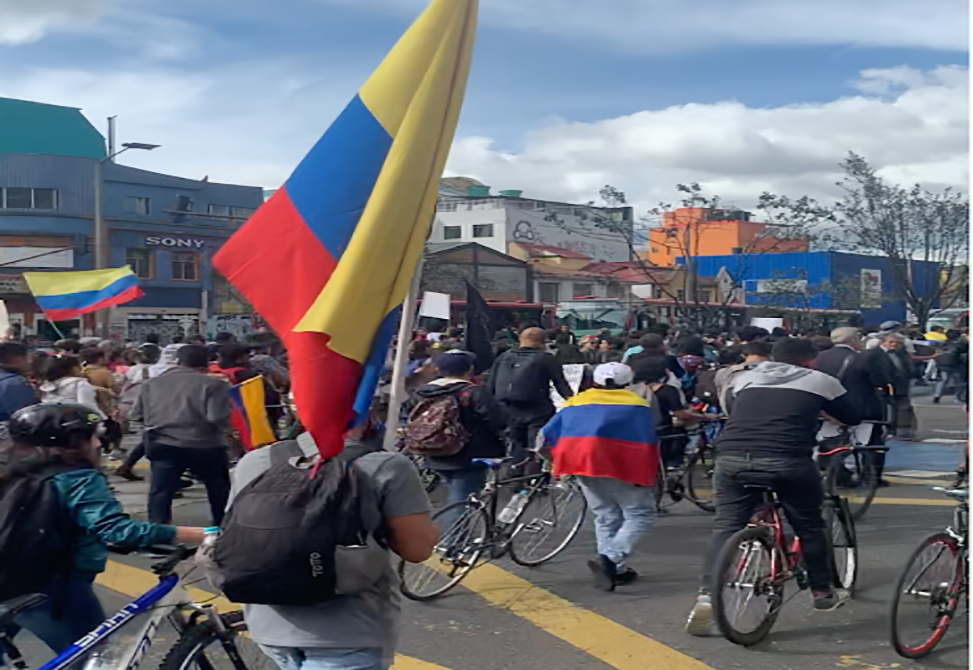 Colombia erupted in a wave of protests and mass mobilizations in November 2019. Major highways, shopping malls, city plazas, and street roads were filled with multiple and sometimes impromptu manifestations. The pattern of daily and unprecedented marches followed a global trend that erupted in Hong Kong, Chile, and eventually the United States with the killing of George Floyd. After dozens of massacres, the systematic assasination of social leaders, and the killing of almost 300 demobilized FARC soldiers, the protests emerged as a response to President Ivan Duque’s government. Sadly, the global pandemic in February 2020 mostly turned off the flames of popular mobilization. It became too dangerous to gather nightly by the hundreds or thousands, and bang on pots and pans (a tradition we call cacerolazo).

A couple months later, and in the current context of the COVID-19 pandemic, the police killing of Javier Ordonez in September 2020 led to another wave of protests; yet they were not as massive as the November 2019 mobilizations. These national protests left 13 dead along with hundreds of injured persons. Then, the most recent national protests occurred in late November 2020, given the one-year anniversary of Dilan Cruz’s assassination by riot gear police. This time, not only was there a substantial feminist presence (largely to protest violence against women), there was also a resounding message from the National Strike Committee which called for rent support, and economic relief to workers during the pandemic.


The COVID-19 pandemic in Colombia not only stifled the momentum of change, it has also taken a heavy toll on human lives, government resources, and the implementation of the peace accords. It has also exacerbated the striking inequities within the country— between rich and poor, between urban and rural communities, and between mestizo Colombians and Afro-Colombian and Indigenous groups. Research from the Ministry of Health has also shown that elderly persons, and mostly those under government health insurance for the poor, have been most likely to pass from the virus. In response to the pandemic, the National Institute for Health prioritized a successful diagnostic campaign that has led to 50,000 daily COVID-19 tests in both public and private health institutions. Moreover, the country has more than doubled its intensive care units since the start of the pandemic (El Tiempo Health Unit, Dec. 13, 2020). And with the recent announcement that Colombia will acquire about 40 million vaccines from Pfizer and AstroZeneca, there seems to be some hope around the corner. 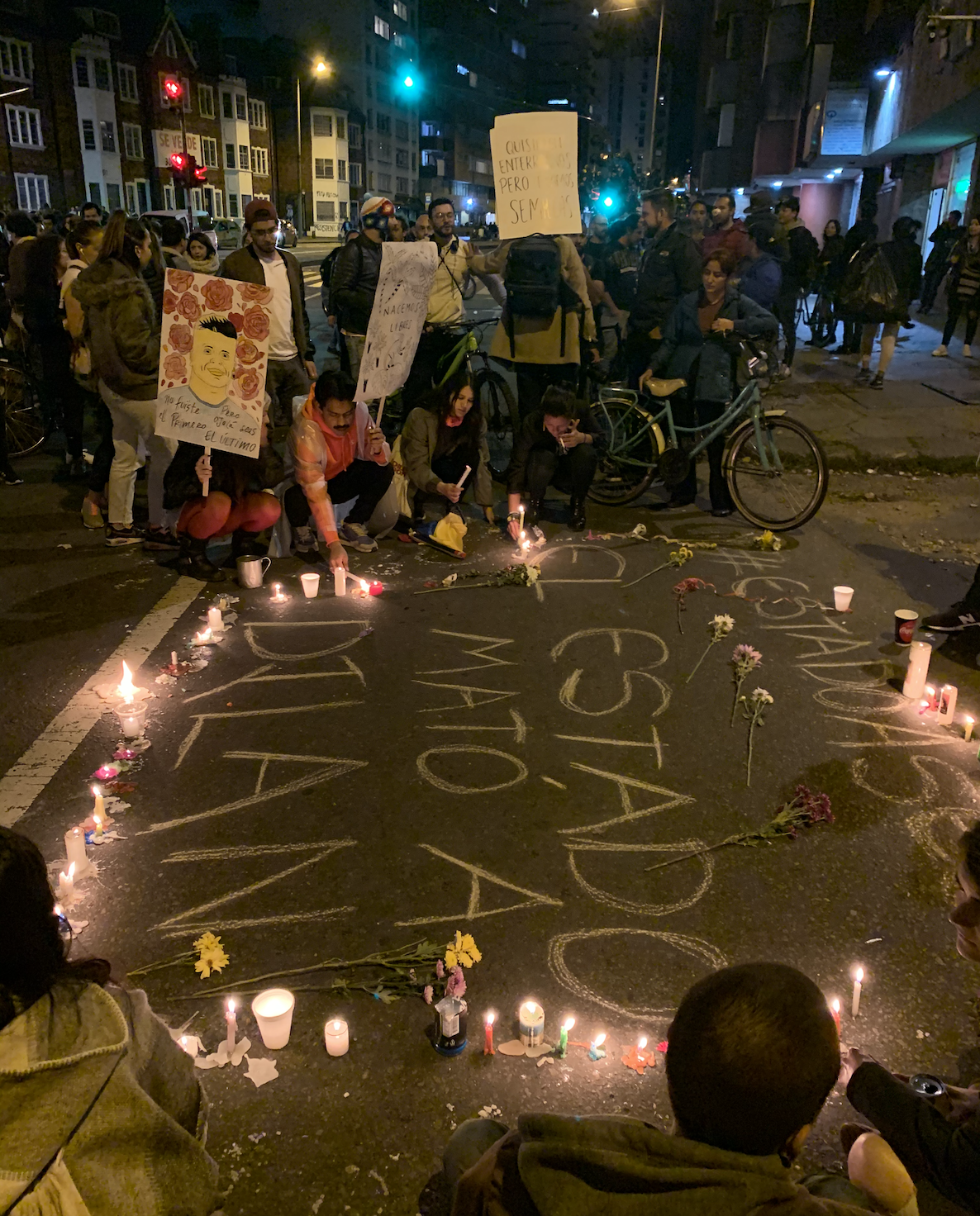 A candle vigil for Dilan Cruz taken by Luis Daniel González in Colombia.

To add to it all, Hurricane Iota last month devastated the Colombian islands of San Andres and Providencia, destroying most of the infrastructure on the islands. And meanwhile, another humanitarian issue is the massive influx of Venezuelan refugees and immigrants, which total about 3 million over the last eight years. An October 2020 report from Refugees International found that Venezuelan women in Colombia have been hardest hit by unemployment, eviction, and domestic violence. Sadly, Venezuelans in Colombia will not receive the COVID-19 vaccine, according to the latest declarations from President Duque.


We will end the year with about 40,000 COVID-19 deaths, according to the Institute for Health Metrics and Evaluation. We also end the year with the start of the Novenas, a Colombian tradition where families and friends gather to sing Christmas songs for nine days before Christmas. Bogotá mayor Claudia Lopez has already called for a ban on gatherings of more than 10 people, in anticipation of holiday gatherings. Bogotá and other major cities have also enacted daily curfews based on the last digit of a person’s identification card. Experts fear that the holidays will accelerate COVID cases throughout the country.


The pandemic has also troubled the country’s journey in the post-conflict. We end the year with 85 massacres and almost 300 assassinations of social leaders. In all, it’s been a painful and tragic year, and I anticipate that 2021 will be similar. The next year will also see dozens of massacres, along with the possible escalation of conflict with FARC dissidents, the growing ELN guerrilla, and neo-paramilitary groups. Political polarization will increase given the ongoing developments in the Special Jurisdiction for Peace (JEP in Spanish). Namely, the FARC admission to numerous crimes (such as the killing of Alvaro Gomez Hurtado), and the expected testimonies of paramilitaries and those implicated in the False Positives scandal will be met with harsh opposition from the Democratic Center party. Calls to eliminate the JEP and the Truth Commission could threaten to undermine the institutional framework for transitional justice.


Looking back, I saw the November 2019 protests as a moment of hope, a moment with the potential of bringing about radical transformations in Colombia. However, it appears that defending the 2016 peace accords requires much more than nightly protests, such as the important work of Colombian journalists, the sustained opposition of center and center-left senators, and the active mobilization of the citizenry through other means. In 2020, the pandemic not only aggravated the humanitarian crises in Colombia, it also stagnated the civic participation of workers, students, and those calling for change.