Home / ISAposts / Perseverance in the Páramo

Perseverance in the Páramo

In spring 2019, UNC geographer Diego Riveros-Iregui received a National Science Foundation Early Career Award to study carbon decomposition rates within the North Andean páramo, one of the most carbon-rich locations on the planet. The project is taking place in a wetland in the Cayambe Coca Ecological Reserve, a national park about 45 minutes outside of the Ecuadorian capital of Quito.
Liz Farquhar holds a Solinst Levelogger, used to record water level fluctuations. (photos by Alyssa LaFaro)

In summer 2019, Riveros-Iregui brought a team of students to the reserve to construct and monitor a series of experiments to measure carbon, water flow, and solutes like chlorophyll and salt. He planned to bring similar groups to record the measurements over the following three summers to collect enough data for analysis.

Liz Farquhar and Tessa Davis are part of Riveros-Iregui’s most recent cohort to go to Ecuador, along with Ph.D. student Kriddie Whitmore. Despite facing numerous obstacles, including cancellation of the 2020 trip due to the pandemic, they finally made it to the field site in the Andes Mountains this past summer, spending two months there as research technicians. They share how the pandemic shaped their research, their senior year and their lives — for both the bad and the good.

“Did I just hear you talking about soil samples?” We pause our morning chatter and turn toward the man at a nearby table. It turns out he’s an environmental engineer, and he’s really curious about the three young women talking about carbon cycling and streams and scientific equipment over breakfast.

This has been our morning ritual for the past six weeks: We wake up, get ready for a long day in the field, and while we sip coffee and eat papaya, we plan the science we are going to conduct. We do this at Casa Magnolia, a cozy, German-influenced bed-and-breakfast in Cumbayá, Ecuador. Oftentimes, other patrons overhear our conversations and ask us about what we are doing. So we give them the elevator pitch: “We are researchers studying the carbon fluxes in the streams and wetlands of the páramo, which are the high-altitude grasslands in the Andes Mountains where we conduct our research. We hope our research can be used to better estimate how carbon released from this ecosystem might be interacting with climate change.”

It’s funny that a complicated project involving months of physical work can be summed up so succinctly. That traveler doesn’t know about how our fingers and toes go numb on rainy days, or how many miles we’ve hiked along streams collecting samples, or even how COVID-19 derailed this project for a year. (We were supposed to be in Ecuador doing this research during the summer of 2020.)

During the second semester of my junior year at UNC-Chapel Hill, I was selected to be a part of an International Research Experience for Undergraduates with one of my professors, Diego Riveros-Iregui. I was ecstatic. I had applied to the same program the year before — but didn’t get in. Getting accepted meant I had a secure job for the summer, the chance to travel and do research, and I had improved as a candidate.

So my disappointment was real when the program was canceled due to the pandemic. Within just three days, my classes went online, and the Ecuador project dissolved. Because of the pandemic and the fact that I was going to be a graduating senior, I gave up on the idea of going to Ecuador to do research with Riveros-Iregui and the Carbonshed Lab.

Thankfully, Riveros-Iregui still wanted to provide me with the chance to do research. Along with two other seniors, I began work on a water-quality project in Durham, North Carolina, examining the impacts of beaver dams on urban environments. I spent my senior year working on this project, expecting it to be the last study I conducted with the Carbonshed Lab.

By the following spring, Riveros-Iregui began asking us about summer plans. He told us there was a possibility that he might be able to put together a research team to go to Ecuador — and that he could hire us on as paid research technicians. My surprise was tangible when, about six weeks before we were supposed to leave, we received approval to continue the project.

I was not super-excited at first — the work would be arduous, and travel during the pandemic sounded scary. But little by little, I figured out my plans. I started packing for Ecuador and grew excited for the chance to do international research. Before I knew it, I was on a plane to Quito.

As soon as we landed, we hit the ground running. Well, as much running as the nearly 14,000-foot altitude would allow. We set up monitoring stations, went over our experimental design and planned the experiments we’d conduct over the next eight weeks. With four days of fieldwork every week, it’s easy to get tired, especially when most days you’re being rained and snowed on the entire day — plus, I swear that 70% of “doing science” is just carrying things around. But just like I adapted to the challenges of the pandemic, I have adapted to the challenges of the páramo.

I have learned to bring extra socks for the days when my boots flood with water. And that I should always have a granola bar or two on hand. I have learned that granadillas (similar to passion fruit) make excellent pick-me-ups and to always pack more water than I think I need. I now know to double-check wiring before leaving an instrument out, to always have a backup of everything and to write everything down. I’ve learned how vital it is to have a team that is able to laugh, even on the hardest days. And never talk about the weather before you get to the field site — or you will jinx it.

There are hundreds of little lessons that I have learned during my time in Ecuador. From proper preparation, to understanding a completely new ecosystem, to describing field techniques in Spanish, the knowledge I have gained will be invaluable to me as I continue my career in science and research. But perhaps the most important thing I’ve learned is resilience. It’s a skill I began honing at the start of the pandemic, one that helped me in Ecuador and one that’s sure to be a constant friend during whatever challenges the future has in store for me.

Liz Farquhar graduated in 2021 from UNC with a degree in environmental science and minors in marine science and Spanish. While writing this article, she was working as a research technician for geography professor Diego Riveros-Iregui. She is currently a graduate student in the marine science program at UNC Wilmington.

It is July 26, 2021, and I am sitting in the balcony of a coffee shop, watching night fall over Cumbayá and the surrounding Ecuadorian mountains — and I am filled with immense gratitude. I have learned and experienced more than I could have ever imagined in the past two months. And I have grown immensely as a scientist and human being. As bittersweet as it is to know I am leaving behind such a wonderful place, I will forever remember this time and continually draw on it as I move forward in life.

In the early hours of June 6, my teammates and I touched down in Quito and breathed a sigh of relief as we collected our boxes containing thousands of dollars’ worth of equipment that accompanied us from the United States. After a 30-minute ride to the neighboring town of Cumbayá, we had finally reached the lovely little bed-and-breakfast we were to call home for the next two months.

But it took a long time to get here. In fact, I didn’t let myself believe it was real until I was sitting on the plane, watching Raleigh-Durham International Airport disappear. I knew from the previous 18 months that plans can change in a heartbeat.

This story begins in January 2020, when I had applied to be part of an international research internship program with professor Diego Riveros-Iregui. I soon learned I was selected to be one of three rising seniors to travel to Ecuador and study the flow of carbon through the páramo — a high-altitude grassland along the peaks of the Andes mountain range. I was beyond ecstatic.

Then, just a couple months later, I received another email: Due to COVID-19, the research expedition was canceled.

The research opportunity of my life had been ripped out from under me like a rug. But Riveros-Iregui asked if I wanted to work in his lab to help with a local project studying the impacts of beaver ponds and manmade bio-retention ponds on the health of urban streams in Durham. I gladly, and gratefully, accepted the offer. As an environmental science major, I love learning about the world around me by getting my hands dirty and experiencing the earth’s inner workings firsthand.

The beaver project was so rewarding. I learned how to use instruments and sensors to poke and prod at the streams so they would tell me their secrets. I learned how to work in any weather North Carolina could throw at me. I learned to work with my lab mates and achieve our goals.

I had no idea how much those skills would help me going forward.

By the following spring, after much paperwork and waiting — and graduating from Carolina — we were approved to go to Ecuador as paid research technicians to conduct the work we had planned to do as undergraduates.

As taxing and rewarding as fieldwork in North Carolina had been, the work in Ecuador quickly proved to be many times more exhausting and exhilarating. The first day in the field was breathtaking — literally. Thanks to the high altitude, the first day was filled with heavy breathing, headaches, nausea and dehydration. Despite the physical challenges, the place was beautiful. Imagine if a coral reef were taken from the ocean and placed on the peaks of the Andes Mountains. The plant life looked like something from a Dr. Seuss book. This was my office for the next two months — and I was getting paid to work in one of the most beautiful places I’d ever seen.

As we began to acclimate to the elevation, a different and much more persistent issue revealed itself: the weather. We had been extremely lucky the first week to have uncommonly warm, dry and sunny weather. We even got the opportunity to see the majestic Antisana and Cotopaxi volcanoes in the distance. But we quickly learned that this was the exception and not the rule for the páramo.

Most days were met with wind, rain and cold upon arrival to the field site. We even experienced snow. Due to the poor visibility, the awe-inspiring images of Antisana and Cotopaxi became a memory. Each workday left us feeling cold, wet and exhausted. Seemingly minor inconveniences became major challenges as we worked with frozen hands.

While these conditions were quite miserable, I learned so much more than I could ever imagine. What kept me going was the knowledge that my team was counting on me to add to the story we were working so hard to tell: the story of the páramo and how the climate continues to change even when the world seemingly stops.

Tessa Davis graduated in 2021 from UNC with a degree in environmental science and minors in biology and Spanish. While writing this article, she was working as a research technician for geography professor Diego Riveros-Iregui. She is currently working with AmeriCorps to educate teenagers about science professions at the North Carolina Museum of Natural Sciences in Raleigh. 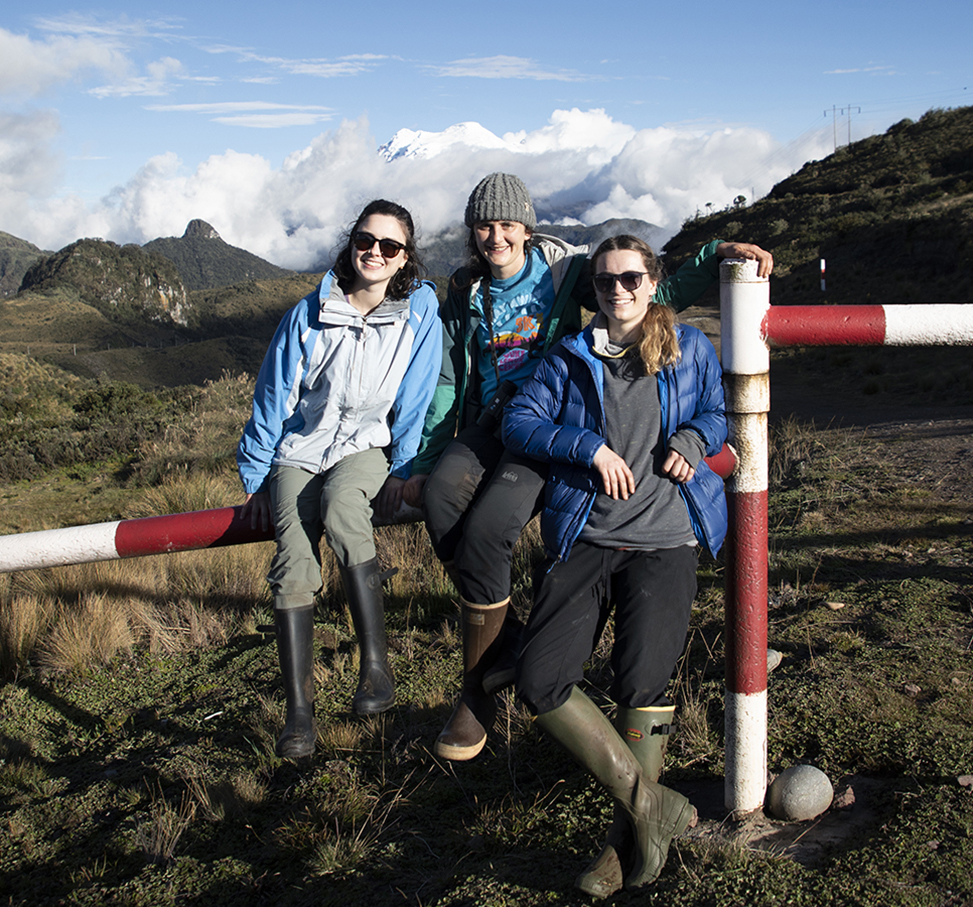 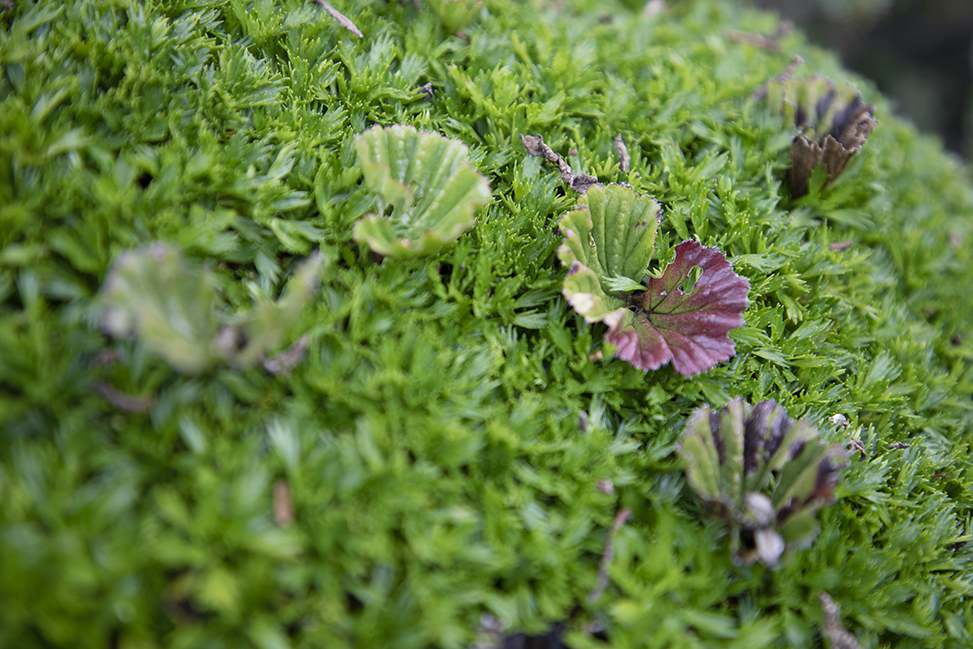 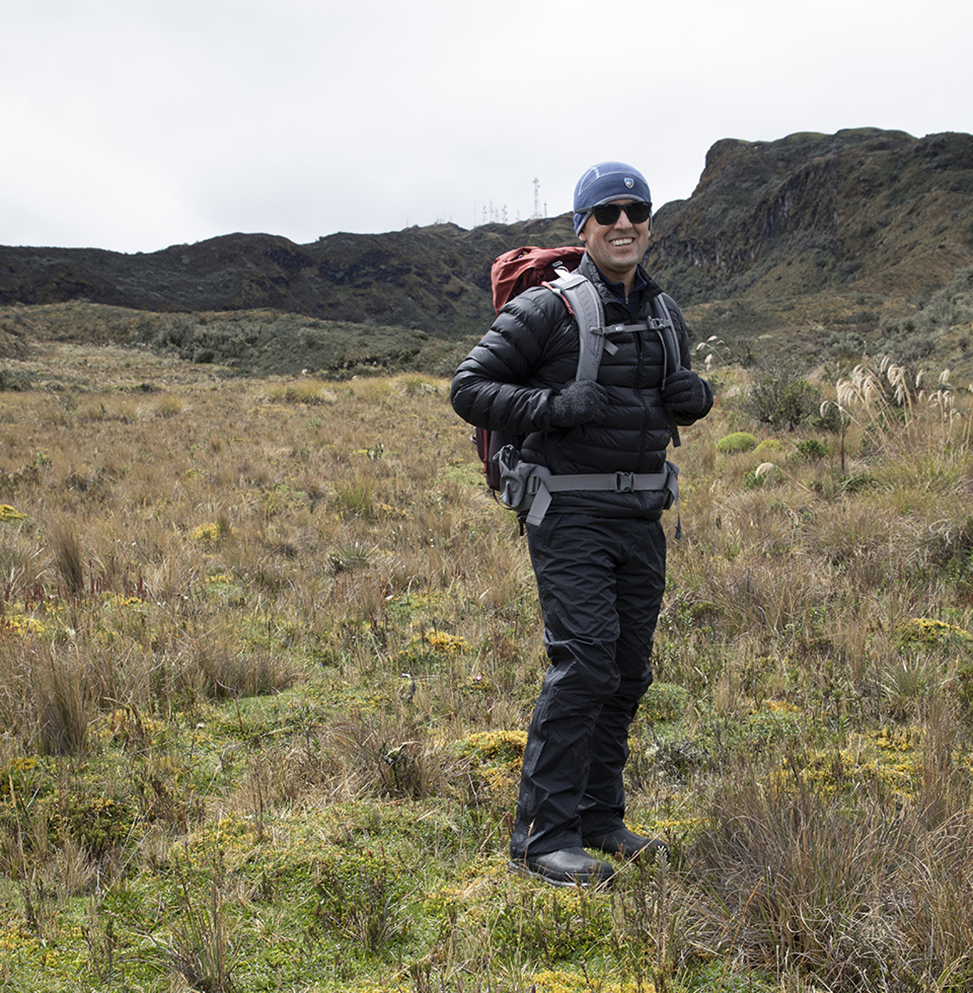 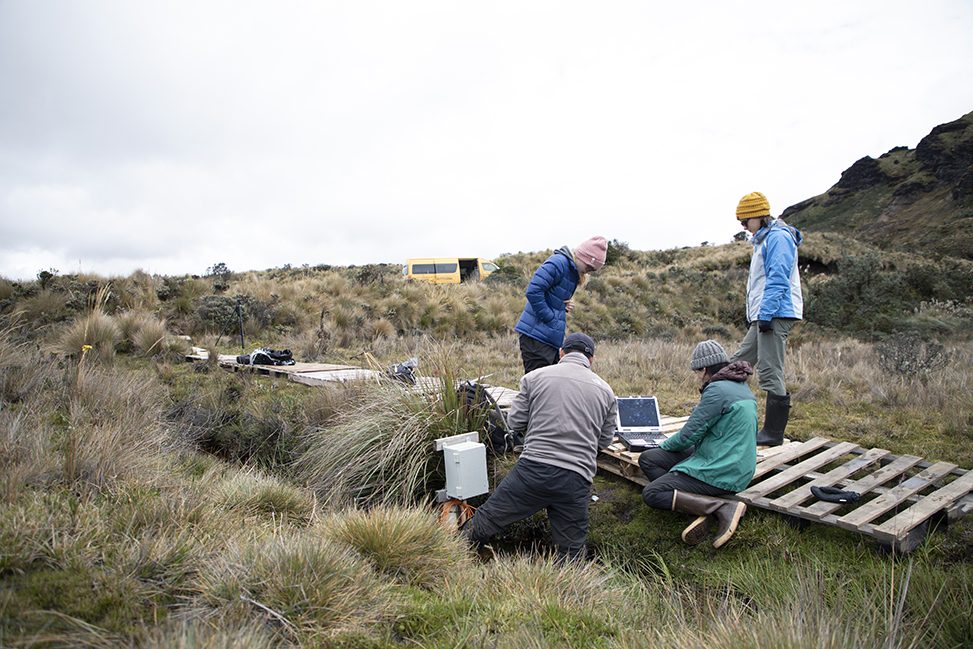 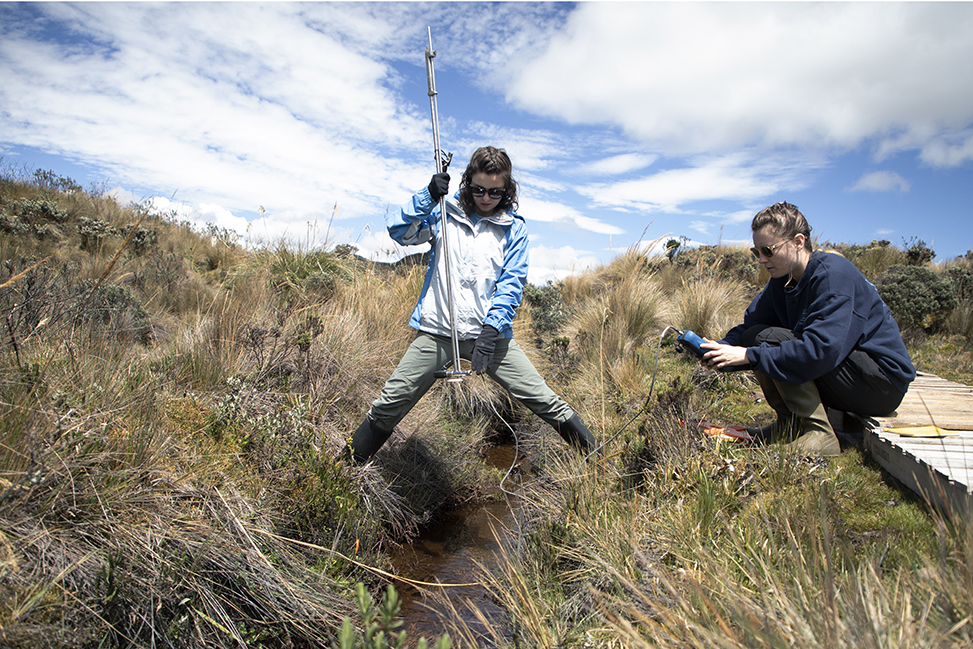 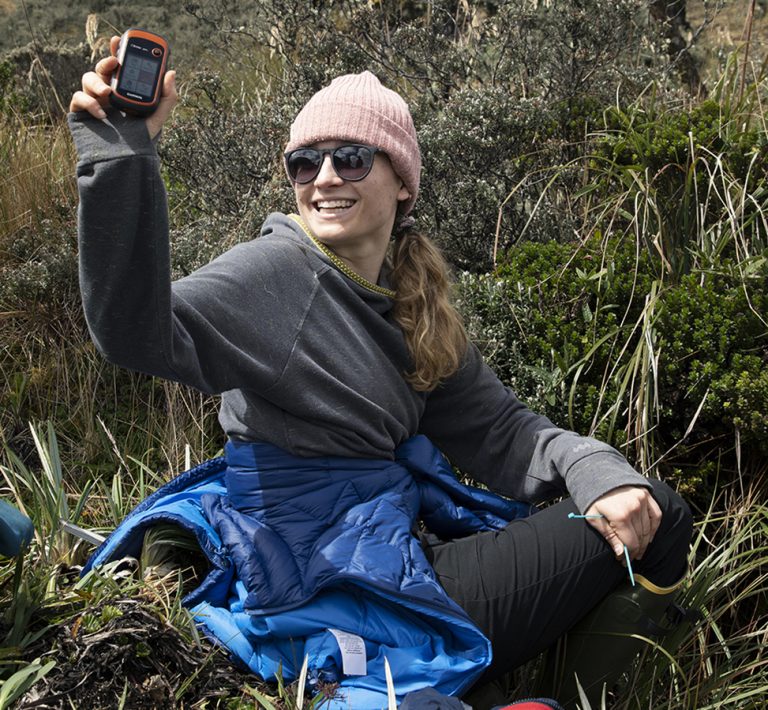 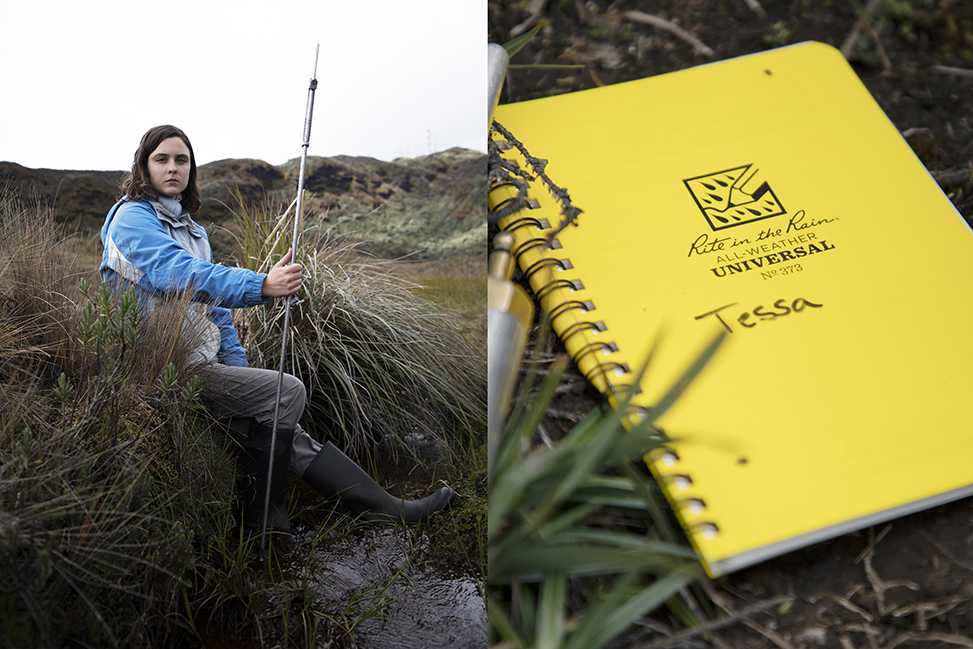 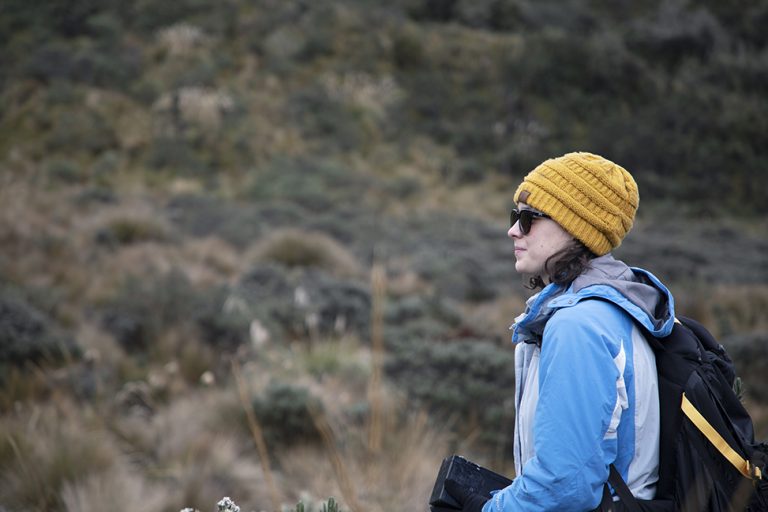